Nearly everything will be new at the 22nd edition of the Swiss Seniors Open, the longest-running tournament on the European Senior Tour to be held at the same venue every year. “In 2018, the Swiss Seniors Open will be held in Alliance Pro-Am format for the first time,” explains Ralph Polligkeit, President of the Organising Committee. In parallel to the traditional stroke-play tournament, a Pro-Am event will thus be played and scored during the first two tournament days, with each team being made up of a Tour professional and an amateur player during both days. “For amateur golfers with ambitions in their chosen sport, this represents a unique opportunity to be part of a Tour event,” says Polligkeit in underlining the format’s appeal. As before, the final round on Sunday will be contested exclusively by the professionals. In 2018, prize money at the Swiss Seniors Open will total EUR 300,000.

The Swiss Seniors Open, which has been “at home” at the Grand Resort Bad Ragaz since being held for the first time in 1997 and is played on the Golf Club Bad Ragaz Championship Course, continues to enjoy great popularity ahead of its 22nd edition. This popularity was confirmed by the receipt of a request to take part from a Senior Major winner back in January. A first-class field of competitors comprising 54 golf professionals aged 50 plus is thus guaranteed for the tournament between 6 and 8 July 2018.

New format at the 22nd Swiss Seniors Open
True to the old adage that nothing is more constant than change, the President of the Organising Committee, Ralph Polligkeit, has continually developed the Swiss Seniors Open over recent years, giving it a new look and keeping it attractive for players, spectators and sponsors alike. For the 22nd edition of German-speaking Switzerland’s biggest golf event, Polligkeit is now set to introduce a significant change: the tournament’s format is to be changed for the first time in its history. “The 2018 Swiss Seniors Open is now to be held in Alliance Pro-Am format,” explains Polligkeit. This Pro-Am format will be played out on two of the three tournament days: “The final round on Sunday will as always be contested exclusively by Tour professionals. In parallel to the stroke-play tournament played among the professionals, the first two days will also see the scoring of an Alliance Pro-Am event, with each team being comprised of a Tour professional and an amateur player,” says Polligkeit in explaining the new format, which fans are already familiar with from the Pebble Beach Pro-Am (US PGA Tour) and the Alfred Dunhill Links Championship (European Tour). The new format has been well received by the sponsors, who with their commitment guarantee the continuation of the Swiss Seniors Open and the prize money of EUR 300,000. “For the sponsors, this Alliance Pro-Am represents a unique opportunity to provide their clients with a one-of-a-kind experience. All amateur golfers with ambitions in their chosen sport dream of playing in a Tour event,” says Polligkeit, who himself has a low single-figure handicap. In contrast to traditional Pro-Ams – two of which will continue to be played as part of the “preliminary programme” of the 2018 Swiss Seniors Open – the Alliance format offers amateurs the chance to take part in a professional tournament under real Tour conditions. “The professionals will already be battling it out for prize money and points in the Order of Merit on Friday and Saturday. The laid-back atmosphere of traditional Pro-Ams played on the Tour and the chance to relax and grab a snack enjoyed by the professionals and guests on Wednesday and Thursday will not be part of the agenda on Friday and Saturday,” says Polligkeit. “In return, good amateurs will have the unique opportunity to compete with the golfing stars under Tour conditions.” The small difference: while the professionals need to qualify on the basis of their past sporting achievements, via the Tour Order of Merit or via the Qualifying School in order to participate at the 2018 Swiss Seniors Opens, the starting places of the amateurs for the Alliance Pro-Am on 6 and 7 July 2018 can be purchased. 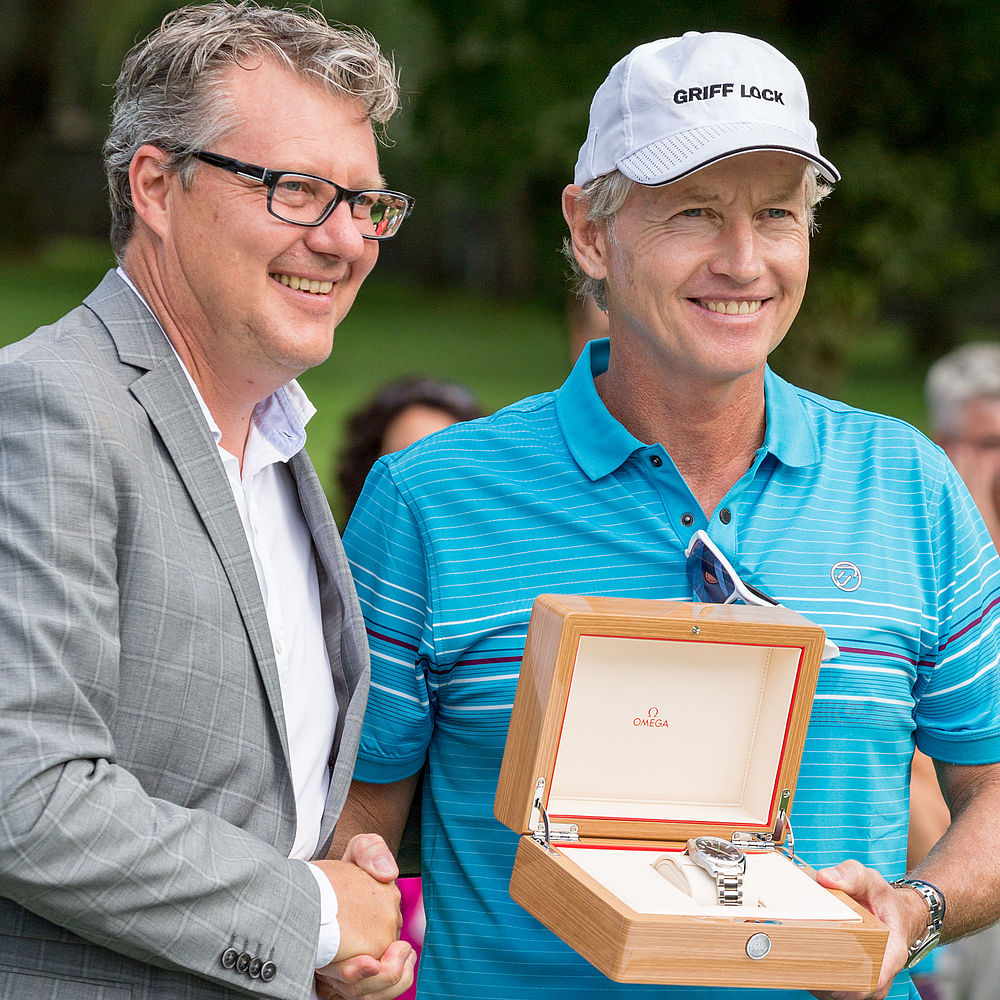 Senior Tour with a title sponsor for the first time

In 2018, there will also be changes for the European Senior Tour, of which the Swiss Seniors Open is part. Founded in 1992, the European Senior Tour will this year have a title sponsor for the first time in its history. Since 2 January 2018, it has been called the Staysure Tour. Staysure, an insurance company domiciled in the United Kingdom, has secured the naming rights to the European Tour for golf professionals aged over 50 for 10 years and at the same time has also become the title sponsor of the PGA Seniors Championship. After years of financial difficulty, things are once again looking up for the seniors circuit. As the Tour touched upon when announcing its new title sponsor, the recently published tournament calendar of the 2018 Staysure Tour includes five more tournaments than in 2017, with 20 tournaments held across four continents to be played out this year.